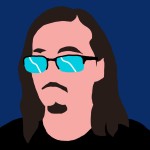 I first picked up Magic in 2003, and I've been perpetually In Bolas's Clutches ever since, even while I was working on the design for Shadow Era. I've always been a bit of a spike-johnny hybrid and love building decks with strong, well oiled core synergies the most. This is why I spend as much time as I do with Commander, and now, Oathbreaker. I wrote for Magic occasionally on a couple places when I was younger, at a time where casual formats like these had yet to take hold. Now that they have, I'm back and brewing for the world, for better or worse.