When discussing Oathbreaker, the Signature Spell is a popular topic. What are the best Signature Spells? With access to almost every instant and sorcery in Magic's history, narrowing the choice down to just the right spell can be a challenge. Today, I want to look at types of Signature Spells in three categories:

Your Oathbreaker and Signature Spell can avoid the command zone tax if they benefit from an appropriate cost reduction- this is because the rules take any additional costs into consideration before applying any reductions. Because of this, there are several spells where you may never have to pay the commander tax, due to the way the cards were designed. To understand this better, check out the faq. 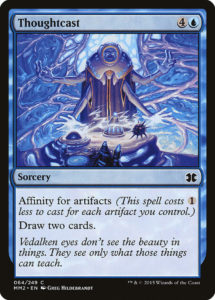 Affinity for artifacts is considered one of the most notably powerful mechanics in magic's history. This reduces the cost of a spell by 1 generic mana for each artifact you control. With a deck that produces artifact tokens or can flood the board with artifacts another way, you could possibly cast your Signature Spell over and over again, only paying the colored mana cost.

Thoughtcast [] is the cornerstone of modern affinity, and it has the potential to be a powerhouse in Oathbreaker. Just try it with Saheeli Sublime Artificer []. With a steady supply of cheap artifacts paired with other artifact payoffs like Sai Master Thopterist [] you may never spend mana on the command zone tax for this spell. 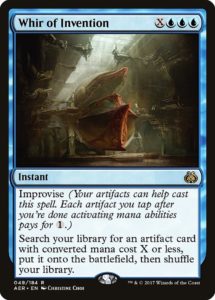 Improvise is the "fixed" version of affinity, because you have to tap your artifacts in order to get the cost reduction, making it more difficult to chain improvise spells together over and over. Still, the right artifact focused deck could capitalize on a handful of particular improvise spells.

If you want an alternative to Thoughtcast, Reverse Engineer [] will let you draw 3 cards, but you'll still have 2 colored blue to consistently pay.

The more exciting improvise spells are Whir of Invention [] and Saheelis Directive []. If you want to play several high costed artifacts for free, then you would go with the Directive. If you really just need a handful of key artifacts, then you may prefer Whir.

Of course, you can always run Inspiring Statuary [] in your deck to give any Signature Spell improvise, but that's an extra piece to assemble. 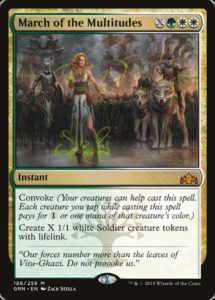 Convoke is great in that you can use your creatures like mana dorks, and it can even pay for colored mana. This means with the right deck and the right Signature Spell, you can arguably cast the spell over and over again for free.

Many different spells in Magic's history have convoke, but the one that caught my eye was March of the Multitudes [].

Not only does it have convoke, but it makes an army of creature tokens that you can then use to convoke it again. This has the potential to produce an absurdly large token army all by itself. Pair with an Oathbreaker like Huatli Radiant Champion [] and you can make Huatli skyrocket in loyalty the turn you cast this, use her ultimate the next turn to turn this spell into a card draw engine, and start using her minus to swing for lethal. 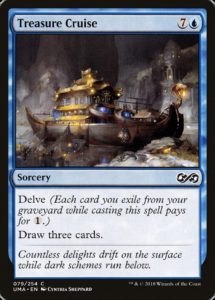 Being able to turn your graveyard into a mana source makes delve a fast and powerful mechanic all by itself. With an Oathbreaker such as Jace Wielder of Mysteries [], Kiora Master of the Depths [], or Ral, Izzet Viceroy [],you can set these types of spells to be played over and over, though maybe not quite as easily as the previous mechanics mentioned.

Three delve spells immediately come to mind: Treasure Cruise [], and Dig Through Time [] will rapidly draw you into more cards. You may also consider usingTemporal Trespass []. The Signature Spell replacement effect makes the self-exile a non-issue, to start. If you can get enough looting or self-mill going with this card, it does not seem unrealistic to take 3 turns in a row. With Jace, that could mill you to victory. 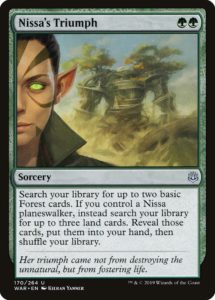 You plan on using the spell to establish your board state early on or in an emergency. You will probably only have to cast it once or twice. For example, a very popular Oathbreaker/Signature Spell combination is Nissa Steward of Elements []//Nissas Triumph []. This is for one specific reason: With a Nissa Planeswalker in play, Nissa's Triumph can search for 3 lands of any type, and not just basic forests! In a singleton format, you won't often need to fetch more than 3 utility lands in your deck, and almost certainly not more than 6. Many were also quick to notice that this is the perfect card to search up Tron: Urzas Mine [], Urzas Power Plant [], Urzas Tower []. That's right- you can play modern Tron in Oathbreaker if you want!

Board wipes are another example of a signature spell you will probably only cast once or twice. Maybe you are playing a control strategy or are concerned about early aggro from a very aggressive deck in your meta. Something as simple as using Supreme Verdict [] can be useful since it is low enough cost to play early, can discourage early attacks from fear of activation, and can even protect your Oathbreaker by wiping the board after they come down. 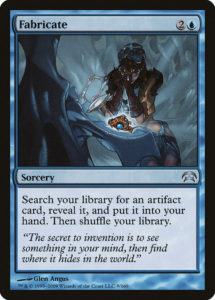 Tutors can also be effective as your Signature Spell. Do you actually wish your signature spell could be an artifact? Fabricate [] can go find that artifact for you. This opens the door to effectively storing an enchantment in your command zone with Enlightened Tutor []. You can do the same with creatures with a little help from Worldly Tutor []. That being said, you should be wary that other players will see a tutor in your command zone and and expect you to be setting up a combo.

I have seen talk about several ideas for Signature Spells that seem like a good idea on paper, but may actually cause you problem in the long run.

One school of thought it that obvious combo pieces should probably not be in your command zone. This is particularly true if your Signature Spell has a combo with your Oathbreaker. For example, Narset Parter of Veils [] and Windfall [] have been discussed since Narset was first spoiled with War of the Spark. The idea of dropping her and then casting Windfall to destroy the hands of everyone at the table might seem appealing, especially since you will always have access to both cards from turn 1. However, Oathbreaker's lower life total makes early game aggression more viable. Because, your Oathbreaker must be in play in order to cast your Signature Spell, your opponents will see the combo coming and be ready to stop it. They will keep counter magic on hand to keep a back breaking combo from being cast. Instead, consider putting that combo spell in your 58 and a more innocuous one in your command zone. 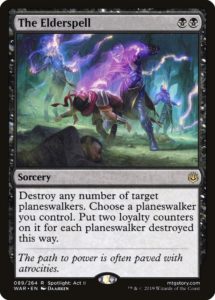 Speaking of counter spells;  I wouldn't recommend putting a counter spell in your command zone in most cases. The commander tax will make the spell inefficient to use over and over again. Even if you use a spell like Assert Authority [],which can maintain a low cost throughout the game, the fact people know it's coming means your opponents will be prepared. The power of a counter spell is largely opponents never being certain it is available. Unless you desperate need to protect a combo, or can consistently cast your spell cheaply, I wouldn't use these. Instead, consider a low cost card draw spell that can keep your hand filled so you are drawing into more counter spells.

Finally, one card I thought was worth mentioning entirely on its own is The ElderSpell []. More than most other spells, this is the card I see mentioned as a Signature Spell the most often. While it has a huge flavor impact when paired with Nicol Bolas, Dragon-God [], this is another instance where the card is probably better when opponents don't see it coming. A savvy table will hold back their Planeswalkers, but that also means you will likely attract early aggression if your opponents actually want to play their Oathbreakers. This is an excellent card in your deck, but having it in the command zone paints an unnecessary target on yourself. If you feel like trying to find a way to paint a target on your head and win anyway, check out Medina's list.

Are any of these cards your Signature Spell? Are there any similar ones I missed? Let me know in the comments below.