They say that comedy comes in threes, but if the first previews from Core 2020 are any indication, the same can be said of Chandra. Here at oathbreakermtg.org, we wouldn’t want you to miss an opportunity to pick up some cheap cards that are going to be amazing for our brand new red-breakers!

Before we get into specific builds, it’s important to note that inherent in their design, these three Chandra’s synergize directly with each other. They belong in each other’s 58. They are well designed to curve into each other:

While a lot of the new Nalaar’s have overlap, each one has a distinct way it can be built as an Oathbreaker. With each distinct Oathbreaker construction, there are distinct cards you should consider! Since we have three Chandra's, I've chosen three low-priced cards that you should pick-up for each Chandra-build.

Chandra seems to be passionate about helping everyone… especially if her target happens to be a red Planeswalker. This Chandra has a very unique ability for red. It seems almost color pie-breaking (sorry Mark Rosewater!) for a red Planeswalker to add Loyalty. Much like Ajani, the Greathearted [] before her, Chandra has the ability to pump each red Planeswalker on the field with her first 0 ability.  This ability is going to be quite strong when paired with other Walkers in a mono-red superfriends build!What should we include in Chandra, Superfriends of Flame?

Clocking in at $1.60 pre-order (at the time of this article) , the Oath-Sneak Attack [] is insanely strong in the mono red superfriends archetype. Being able to get a Planeswalker activation for a mere R is pure Value Town! It also makes some normally unwieldly Oathbreakers like Jaya, Venerated Firemage [] powerful. You can create your own sneak attack as you unload your hand of walkers and end it with a Sarkhan the Masterless [] for a massive swing out (as long as you have a way to give your superfrienddragons haste!).

Speaking of the guy who has a weird fetish for bossy dragons, Sarkhan used to be the head honcho of the mono-red superfriends deck. Given Chandra’s lower cost and first loyalty ability, Sarkhan is better suited to be in the 58. Clocking in at ~$2.50, he seems like a more than reasonable buy for a card that really ties the deck together. 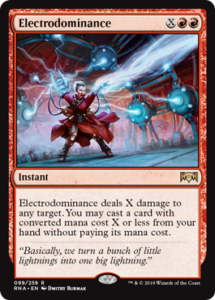 This is more of a strategy suggestion that anything else, but it may shape how you want to choose cards. Chandra’s -2 ability does not directly cast the spell. Rather, it gives you the ability to cast the spell from the graveyard. Some may see this as a downside, but I see this an opportunity to exploit. How? You can cast X spells. A lot of X spells in red are under 3 CMC. When you cast them late game with Chandra’s -2, you’re not only able to cast them, but you are able to unload all the mana you’ve gathered for a blow out. Personal favorites of mine include Meteor Blast [], Electrodominance [] and Starstorm []. It's nice when you can assume that every Fireball [] type spell in your deck has flashback.

Overall. this Chandra is the most flexible of the three Chandras. Each loyalty ability lends to a different strategy. Even her second 0 ability synergizes well with the Uncommon Chandra!

Don’t sleep on this Chandra because she's "merely an uncommon." This girl is on Fiiyyyahh. Historically, any time a Walker has been able to ‘buy back’ their own cost, people severely underestimate them in the first pass (Teferi Hero of Dominaria [], Teferi Temporal Archamge [] Nissa Who shakes the world [], etc).  The sheer value of her -2 aside, she has a built in shock and a weird buff for Elementals. Her second and last ability are good utility to have in general, we should be looking to build around the first ability. Elemental tribal! Why not? As Sherlock would say, "It’s elemental, my dear [reader]"!

Rite of the Raging Storm [] 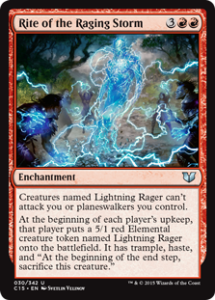 While not an intuitive pickup, this card is surprisingly effective in Oathbreaker. If you’ve read my past articles, I tend to rail against cards that are good in commander but unwieldy in Oathbreaker due to their mana cost.  However, this card can be played the turn after Chandra without a land drop, thanks to her -2 ability. What’s the upside? It gives your opponents' big ugly 5/1s that can easily brutalize most creatures and kill most Oathbreakers --just not yours!. On your turn, they become 7/1s. Clocking in at just above $2.00, it wouldn’t hurt to pick this up if you’re about running Elemental tribal or love a good political card. 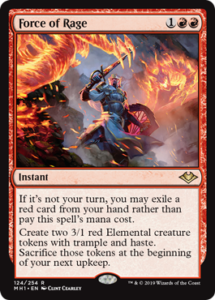 Now, I know what you’re thinking: “Barbariansriddle, why you acting so cray cray? That Force is bad”. Here me out! There is no Pact or Shoal that costs less than a $1.00 market price. Why is this relevant? Free spells are strong. More often than not, you’ll be casting this for it’s non alternate cost, because you want to crash in with 10 trample haste across two bodies. It’s a better Ball Lightning [].  The alternate cost back end grants you a free removal spell that still synergizes with other spell casting abilities. Preordering at $.18, this seems like a low risk pickup. I expect this to be worth at least $1.00 in the next few years. 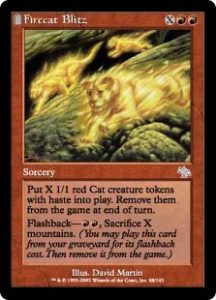 On the surface, these spells seem simple. What they lack in cunning, they make up for in overwhelming numbers. Both of these spells are efficient at making you an army of 1/1 Elemental tokens. The downside for each of these cards is real, but you can build around them to mitigate their drawbacks. Tempt is interesting in that it will greatly punish your opponent’s for trying to match your Elemental making. More often than not, you’re going to come out on top. Firecat Blitz, while not being symmetrical, only keeps the tokens for a turn--but what a turn it is! Tempt with Vengeance already clocks in at around $9.00 (the ship on that one sailed after Omnath, Locus of Rage []. Firecat Blitz is still reasonably costed at $.50.

What this Chandra lacks in flexibility of building, she makes up for in versatility. A lot of people in multiple formats will sleep on this Chandra, but any Planeswalker that can buy back her cost or act as a finisher for your deck is usually stronger than it appears. 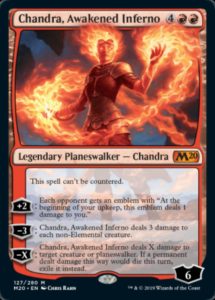 This Chandra is an Inferno, but she ain’t no Disco Queen. She's like a Johnny Cash song; she will make you hurt. You could have it all with her emblem of pain.  Her +2 wants her to be a punisher deck, making the table a ring of fire. And you’ll burn burn burn...that ring of fire!

The Emblem of the Warmind []

Sure, this sounds like a weird pick, but take a moment and think about it. If you want to run this Chandra as an Oathbreaker (or in any other format for that matter), you’re going to want this emblem. Given the natural strength of this Walker’s design, a lot of people are going to want her, which means they should need multiple copies of the Emblem. Keep an eye out during pre-release for these in left over sealed piles and offer to pick these up for .25 or less. 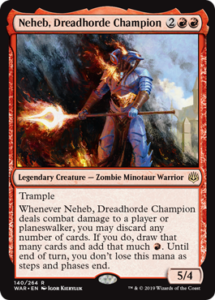 One major issue the Chandrizard will face when using her as an Oathbreaker is simply getting her out. She’s so powerful that once she burns down the door, she can clinch the game. In general, we want cards that can ramp and help us hit land drops or throwaway lands later when we don’t need them. Neheb, Dreadhorde Champion [] fits this profile. The Mighty Minotaur both ramps and draws cards. At .$.35 market, this is perfect pick up for possible purveyors of punishing pieces. 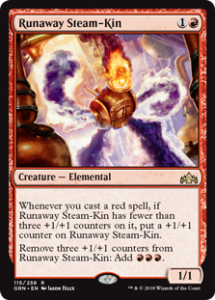 Ramp, ramp, and more ramp! Runaway Steam-Kin is an efficient two mana beater that was previously described as the “red Goyf”. Runaway Steam-Kin is efficient in its design and has the wonderful side effect of routinely putting you ahead on mana each turn. This will help you play your 6 mana Oathbreaker on turn 3 or 4. Despite it’s strong showing in standard, this card has dwindled back to $1.00 market and is a solid card to pick up.

The hype train never seems to end when it comes to preview season. Luckily, neither do we!  Keep coming back here regularly for more Oathbreaker related budget and mtgfinance content! Have fun, roll safe and make sure to Break Oaths, not your bank!

Hi, I’m an avid magic player and content creator who specializes in MTG finance, EDH and now Oathbreaker. When I’m not playing, buying and selling cards I like to spend my spare time educating other player’s about MTG Finance or coming up with wicked fun brews that make people scratch their head!